You are here: Home / Local Heroes / Viren Mehta is Helping Revive and Reinvigorate Civics in America 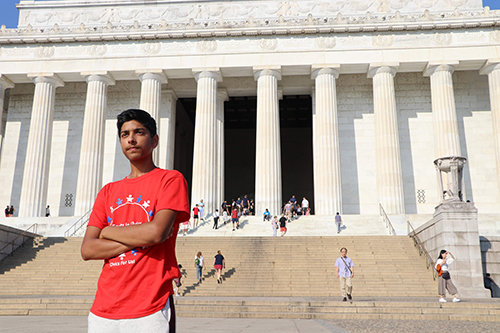 An Oxford Academy teen is working to save the planet — and civics — with the help of a new fellowship.

A common complaint heard lately is that schools aren’t teaching — and kids aren’t learning —civics anymore. Viren Mehta is spending this school year proving it is very much alive and, could have a bright future.

Mehta, a student at Cypress’ Oxford Academy, is one of just 12 students from around the country to win the inaugural Equity in Civics Youth Fellowship, a year-long program exploring not only how to make civics more inclusive and relevant to Americans, but also how the students can become civic leaders themselves.

“I’ve always been interested in civics education, trying to promote change and giving education to everyone,” Mehta says, which is the right idea, since civics is all about educating people on the rights and duties of citizens and the responsibility of democracy.

The fellowship was created by iCivics and Generation Citizen and is funded by the William and Flora Hewlett Foundation, designed to give students the chance to work with experts in the realm of civic engagement and advocacy, helping to build the students’ skills in communication and leadership to help revive and reinvigorate civics in America.

Mehta plans on using his special training to better educate the public on how to fight climate change. It’s his passion, and he’s been working toward this for awhile.

He was National Soapbox Speech Winner for a two-minute speech he gave about climate change that also earned him a trip to Washington D.C. to present his speech and meet congresswoman Jan Schakowsky. The Mikva/Soapbox Organization as well as a teacher recommended him for the fellowship and Mehta was accepted.

“I play baseball, and I’ve always been an ‘outside’ type of person,” he says of his love of the environment. “The fact that we are destroying the earth with greenhouse gases makes me really sad. I think my solution — encouraging and promoting public transportation — will really help because public transportation saves an estimated 14 million tons of CO2 each year. Zero emission buses are being made, and those will also help a lot.”

But before Mehta can move the needle on public opinion about public transportation, he’ll be very busy with the fellowship.

“Luckily, most of the assignments are online, so I can do them at home. Assignments occur every week as well as meetings once or twice a month in which we learn how to make effective social media campaigns and how to talk to the media,” he says. “The trips to Washington D.C. allow us to see each other. There was one trip in September and one in May or June later on in the year. Our goal is to launch a social media campaign that gets us out into the media. From there, we can raise awareness about the issues we feel passionate about and hopefully get globally recognized.”

And despite how meaningful it is, Mehta knows civics is something of an endangered species as well.

“I think civics gives students power and knowledge to make an impact on the world,” he says. “You can see what the youth can do through the climate strike and the example of Greta Thunberg. It means the world to me because students need to know how to create change if we want to be a successful society.”