These OC Halloween enthusiasts are so passionate it’s scary. 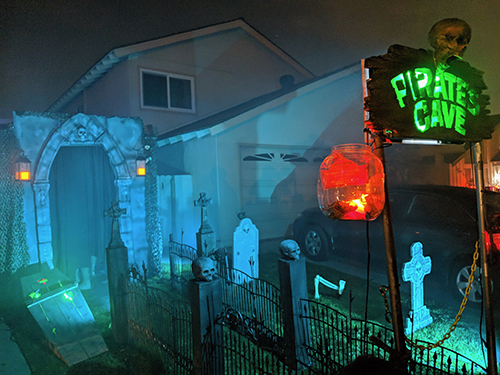 Dave Larson started building his first haunted house in his parents’ garage back when he was in junior high school.

He never stopped. Only now, he’s building with his own son, Jacob, a 15-year-old sophomore at Villa Park High School.

“It requires 11 volunteers each night, which are mostly my son’s high school friends and some of their parents,” says Larson. “It also takes additional volunteers to construct and tear-down the haunt each year.”

The Pirate’s Cave Haunt is, you guessed it, a pirate-themed experience utilizing the front yard, garage and the home’s entry for a 3-minute walk-through.

“We pack lots of great special effects and family scares in a small space,” says Larson.

“I always enjoyed Halloween as a child, and really appreciated those houses that decorated and made it extra special,” says Larson. “I want to do that for my community. It’s the only holiday where people will come visit your home and ring the doorbell. Why not make it something fantastic? It’s also our chance to be Disney Imagineers for a season, which is what my son plans to do some day.”

While some home haunts aren’t for younger children, last year Larson decided to cater specifically to younger guests. The Pirate’s Cave is normally for ages 10 to adult, but now even younger kids can enjoy it in some form.

“We decided to have a ‘no-scare’ walk-through an hour before the haunt begins almost on a fluke,” he says. “The turnout was amazing with very little advertising, and the parents were so appreciative. There are no actors present, and we only leave one scare operational, and is started by pressing a red button. We leave that decision to the parents. It’s always fun to hear the parents argue with their little ones about whether or not to press the button.”

Larson says he decided on the pirate theme 20 years ago after his wife bought him a nautical-style, wooden steering wheel from the thrift store. They built their own “spooky pirate at the wheel” prop out of it — inspired by the one in Disneyland’s “Pirates of the Caribbean” attraction.

“We thought it looked so good that we decided to build a pirate-themed haunt,” he says. “It’s a great theme for kids, but can be made to be a little scary as well. The pirate at the wheel is on our roof each year and remains the oldest prop we built. Most everything is built from scratch as Halloween stores don’t have quality props that would fit our theme.”

In 2017, some fans of the haunt suggested they start accepting donations and seeking sponsorships. They now have two main sponsors: Jeffrey Simons of Keller Williams Realty and Pam Dunn of Mulberry Street Mortgage.

“As the haunt has grown, so has the expenses, work hours and the number of volunteers needed,” he says. “We want to create a great event, and also feed and thank our volunteers any way we can. All that takes money. My dream is some day to get enough donations that it’s just a matter of volunteering time. But for now what isn’t covered in donations is paid for by my company, CreativeCommotion.tv.”

Creating a home haunt is a large endeavor. Larson recommends for people wishing to begin their own, to start small.

“We have been doing this for 20 years now, but the first year was me in the yard with a mask and shovel,” he says. “I’ve often said I think building a haunt like this is the height of creativity. It takes all the skills of a live stage show, but also adds immersive elements as well. Skills that come to mind are construction, costume design, lighting, painting, video editing, sound design, special effects work, acting and public relations.”

Despite the huge time commitment, expense and physical work, many home haunters like Larson return year after year to provide their communities with a little Halloween spirit. 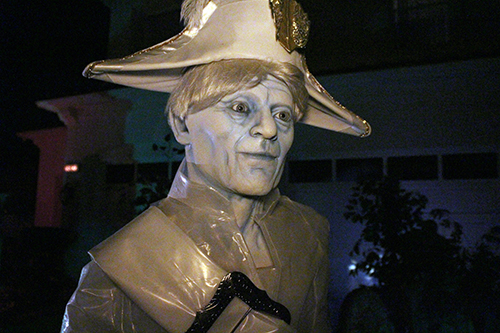 Salar Kohnechi, 33, started building his Haunted Mansion Haunt, inspired by the Disneyland attraction, when he was 15.

“After a while we finally got the opportunity to move into a house and we bought this property in mind, which was ultimately designed with the proper landscaping, decorative features and windows necessary to recreate this classic attraction,” he says. “I keep it going because I love to see the smile on the face of our families going through and we wish to inspire young children to keep that creative spark alive, to pass the torch for future generations. It’s becoming more of a rare sight to see a full-fledged house haunt and we hope to make a difference.”

The 5- to 7-minute, Trabuco Canyon haunt is designed for a wide audience.

“The age range is for 5 to 65, can be scary depending on a child’s personality but there is absolutely no gore or inappropriate themes,” he says. “We kept the feeling true to the attraction but added a bit more thrill and darkness.”

He says he chose Disneyland’s Haunted Mansion as inspiration because it was a childhood favorite of his and he always dreamed of recreating the props himself.

“I experimented all throughout my teens,” he says. “It’s all about how badly you want to make the prop and find a way. Many times I would spend hours at the hardware and fabric stores just to get an image in my head how I was going to accomplish a task. I also assembled a talented team later on who helped with certain tasks such as sewing. When it came to tech — that was online research, which I also put in quite a few hours finding the answers to my questions.”

There is no entry fee, though donations are accepted to help cover expenses.

“The total cost for this event was approximately $30,000 over a period of 18 years and we are making investments in new equipment all the time including lighting, fog, computer synchronization, animatronic props and general wear,” he says.

His home haunt also has a few scare actors, depending on the night.

“The previous way we did the event was based around the whole exterior of the house, now we have it going through the garage and halfway around the outside,” he says. “This helps us keep things partially protected from the Santa Ana winds and allows for our quality levels to increase in these sections since we don’t have any weather hurting props or show elements.”

Scream In The Dark Haunted Maze

On the scarier side of the home haunting spectrum is Scream In The Dark Haunted Maze in Lake Forest. Geared toward ages 12 and up, this haunt has been running for 19 years. Lori LaPorte and Craig Leventhal, who designs the haunt, are its co-creators.

“The theme is a little bit of every kind of scare,” says LaPorte.

The 2,000-square-foot haunt takes about 10 minutes to walk through and it runs throughout the couple’s large backyard. There are about 10 scare actors a night and there’s a $5 entry fee.

LaPorte says they were inspired to create their home haunt because of their love of Halloween and wanted to use their technical and artistic skills to create a fun activity for their community during the season. She says it takes them about three months several evenings per week to put the haunt together.

“Craig and I built and decorated the haunt by ourselves,” she says. “We love Halloween and it’s fun.”

She offers some tips for those wishing to build their own home haunt.

“The best time to buy the props is after Halloween,” she says. “Be creative and re-purpose props and materials that you have around your house.”