The annual OC Fair is back at the Costa Mesa fairgrounds with an eclectic assortment of the most unique eats for the entire family to stuff their faces. Here are six of this summer’s must-tries. 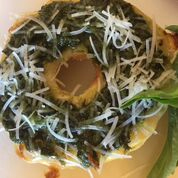 No, it’s not spaghetti on top of a donut; it’s donut-shaped spaghetti. This latest food craze, which reaches far beyond the culinary laboratories of county fairs, combines the mobility of a donut with the flavor of pasta. The “donut” (which more closely resembles a bagel) is made with heavy whipping cream, mozzarella cheese and spaghetti and is topped with pesto, Alfredo or marinara sauce. Finally! Eat pasta with your hands without having to change your clothes afterward. Available at Pignotti’s. 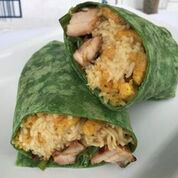 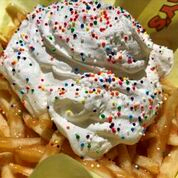 If you’ve ever wondered how you could get kids more interested in french fries (and who hasn’t?), you can relax. The folks at the OC Fair have figured it out. They take french fries, drench them with butter, cover them with sugar and cinnamon, add a sea salt caramel sauce, and top them with whipped cream and sprinkles. Will plain old ordinary fries ever do again? Available at Biggy’s. 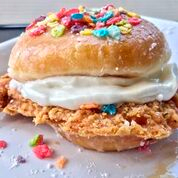 If you’re short on time and want to get breakfast, lunch and dessert over with in one sitting, this might be just the thing. Fried chicken and vanilla ice cream sandwiched between two jelly donuts and topped with powdered sugar and Fruity Pebbles.
This Colonel-Sanders-meets-Ben-&-Jerry’s conglomeration of sweet and savory was so popular last year that they had to bring it back. Available at Chicken Charlie’s. 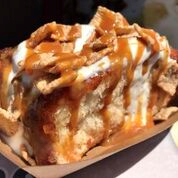 Exclusive to the Orange County Fair, the OC Crunch Cinnamon Roll is an even sweeter twist on the traditional breakfast favorite. With frosting, cinnamon crunch cereal and caramel atop a cinnamon roll, this one’s sure to satisfy your sweetest sweet tooth. Available at D&D Country Fair Cinnamon Buns. 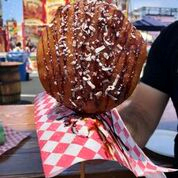 Deep-fried Pineapple On a Stick

Deep-fried pineapple smothered in sweets might be a dangerous precedent to set with the kids, but this is one fruit they most likely won’t refuse. With powdered sugar and caramel on top of a golden, crunchy batter, they might even ask for seconds. Available at Chicken Charlie’s.