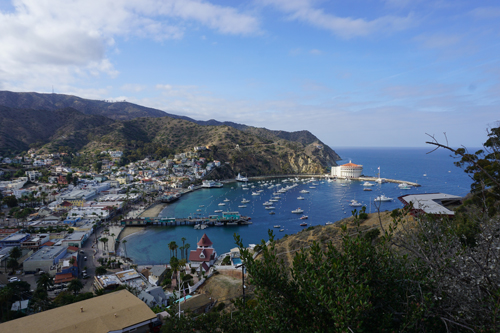 The impact of a million visitors a year and the arrival of dozens of activities can’t shake off the original
Catalina. Here’s hoping it never fades away.

By the nature of their isolation, separated by sea from other influences, islands can be slow to evolve. When a people, a way of life, a plant or an animal takes hold, these things happily cling and resist the forces of change as the world spins. Therein lies the charm of Catalina Island, at least for me.

Most of Avalon took shape in the ‘20s and ‘30s. The shaper was William Wrigley Jr., the chewing gum titan and owner of the Chicago Cubs who bought the controlling interest in the Santa Catalina Island Company in 1919 and began investing millions to develop the island. The iconic Casino building rose up, the Cubs moved their Spring training here, and Hollywood began filming and playing on Catalina. Notables who lived, worked and played in and around Avalon and the film center of the island, Two Harbors, include Charlie Chaplin, Errol Flynn, Clark Gable, Marilyn Monroe, and novelist Zane Grey. They left behind wild tales and buffalo. Yes, 14 of these now famous island beasts were over in 1924 to be part of the filming of “The Vanishing America,” and they were left behind. They didn’t even make the final edit and, insult-to-injury, were also left out of the movie. Now numbering about 150, members of the herd get more respect these days and are the stars of the inland bus and Hummer tours. The beasts, the rise of the Casino, and the Hollywood stories are all part of Catalina’s DNA (and on display in the Catalina Island Museum).

Cut to the present and there is a whole lot more to do here than ever before; even though, to me, Catalina looks and feels the same as it did when I first visited 35 years ago. Thanks to the stewardship of the Catalina Island Conservancy and the Santa Catalina Island Company, it remains unspoiled despite its proximity to Los Angeles and Orange County, despite dozens more activities and despite a million visitors a year.

I came here in my college years, snorkeled to see the bright orange Garibaldis at Lover’s Cove and drank flaming cocktails with my buddies at El Galleon. A few years later, I learned to scuba in the cathedral-like kelp forests of the island’s coastal waters. Another decade later, I kayaked and mini golfed with my then 10-year-old son. Add several more visits in the past decade and new chapters in the story of my life (which we don’t have to get into here). The point is, everything around me changed, but not Catalina.

Earlier this year, as my sweetheart and I stepped off the Catalina Express in Avalon Harbor (her first visit), the sights and sounds were the same as those that had greeted me many times before: the grand Casino rotunda (89 years old this month), the Green Pier, Lover’s Cove, the Chime Tower chiming, the row of small shops, restaurants and inns along the beach, children laughing, golf carts buzzing, the caws of gulls—familiar as an old friend.

But Catalina is not the same old friend, the biggest change being the dozens of land and sea activities launched and operated by the Santa Catalina Island Company. When a world-class zip line, called the Zip Line Eco Tour, with 3,761 feet of cable, opened in 2010, it brought in one fell swoop an era of change in how to spend time on the island. The epic attraction boosted the island’s economy, according to our Skyline Tour bus driver, as part of his informational drive-time patter to the passengers—my wife and I among them. And the development of new adventures has yet to slow down. In the three-day visit, we realized what he said, as we rode the bus on the Skyline Tour, dove below in the Undersea Exploration submersible, tested our steadiness on the Aerial Adventure and swooshed across Descanso Canyon on the zip line. Well, my wife did the swooshing; I was over the weight limit and found my purpose on this adventure in capturing with my camera the look on her face as she completed the final zip and returned to terra firma to tell me about it. 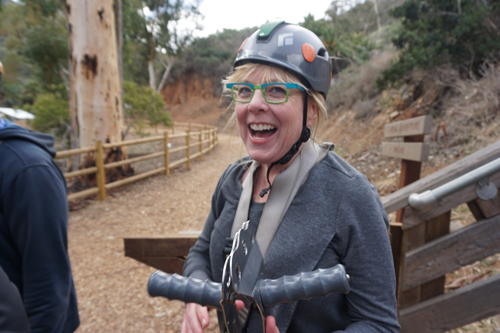 The Zip Line Eco Tour is actually five separate zip lines that zig-zag down Descanso Canyon, the longest of the runs traveling 1,100 feet. You fly as fast as a falcon, over 30 miles per hour, while trying not to look down at the canyon floor that is 300 feet below, but you are basically payload, meaning no athletic moves or strength needed. Going up and down the steps to the platforms is about as strenuous as it gets. Children as young as 10 can zip solo, and as young as five can zip tandem; 90-year-olds can zip, and anyone between 80 and 240 pounds can do this. I can’t zip. I weigh 250. So I waited at Descanso Beach at the end of the zip run until she completed her final swoosh, two hours after she started. As she came down the stairs she didn’t have to tell me how it was. Her experience was written in her face—the astonished eyes, the giant smile and windswept cheeks: she had flown high and fast and touched the face of God.

More high-flying fun can be found in the eucalyptus grove above Descanso Beach, where a course, actually five courses ranging from beginner to advanced, tests your inner spider monkey with rope ladders, log bridges, balance beams and mini zip lines. There is no better way to wear out the children (must be at least 7 years old, and 9 years old to go solo) than to have them climbing and swinging from the trees. All adventurers must be at least 55 inches tall and weigh between 50 and 270 pounds. 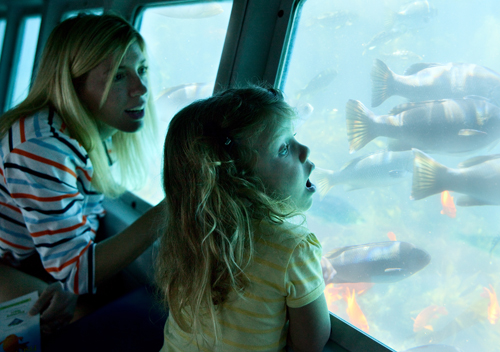 In terms of kid-friendly activities there is no shortage for the short ones, above and under water. Perhaps the most spectacular sightseeing for all ages is below on the Undersea Expedition. The Sea Wolf Semi-Submersible might look at first glance like that old submarine ride at Disneyland, but it’s not that tacky once you board and go below. It’s actually technologically advanced and marine-grade. Your window is only five to seven feet below the surface, but once you get away from the pier and into Lover’s Cove, you are face-to-gills with massive numbers of bass, sheepshead and the day-glow orange Garibaldi. It became apparent very quickly that the vessel and the fish know each other well when a large school of bass crowded in front of our portholes as if they were watching us humans on the other side of the glass, except they weren’t there to people-watch. A spew of fish food shot out from the side of our craft, setting off a feeding frenzy. I was as excited as the children sitting next to me, except they were probably thinking of Nemo while I was thinking of dinner. If you want more marine life adventure choices, there’s a Flying Fish vessel, a Glass-bottom Boat Voyage, and the Ocean Runner, which is a blast, a speedy Ribcraft inflatable with 500 horsepower that gets into and up close with the dolphin schools in a hurry (for children 5 and up). We played with thousands of dolphins, which covered the surface as far as you could see, with an Ocean Runner on an earlier trip a few years ago. 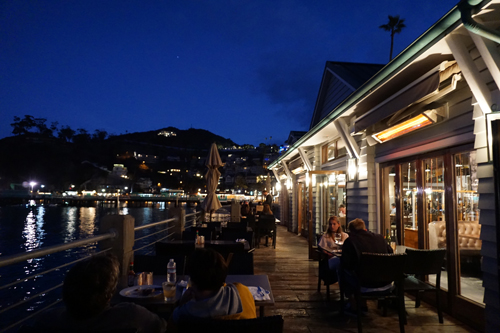 After long days of zipping, fish-watching and exploring the island’s interior, we dined on a deck hanging over the bay at Bluewater Grill, just as the sun set—an amazing view to see and delicious seafood to eat. Avalon Grille on the waterfront has a warmer, more elegant interior with equally great steaks and fish. For a casual lunch or dinner that feels more like a local hangout than any place on the harbor, dive into The Lobster Trap, just a half a block off the beach.

We love the nicely restored mid-century Hotel Pavilion. With its beach walk location for people-watching and the complimentary wine and cheese each afternoon, Pavilion picks up the vibe of this busy part of the harbor. For a more secluded stay, conducive to romance, we like the Avalon Hotel on the quieter Casino end of the beachfront, a warm craftsman-style inn with a tropical patio and koi pond, and a sweeping view of the harbor from its rooftop terrace. Both inns offer complimentary breakfast. www.theavalonhotel.com.

There are not enough pages in this issue to cover all of the activities, sights and cuisine of Catalina. A good source for all the Catalina Island operated fun is www.visitcatalinaisland.com. For more information, also go to www.lovecatalina.com. To get to the island, we took the Catalina Express, www.catalinaexpress.com. 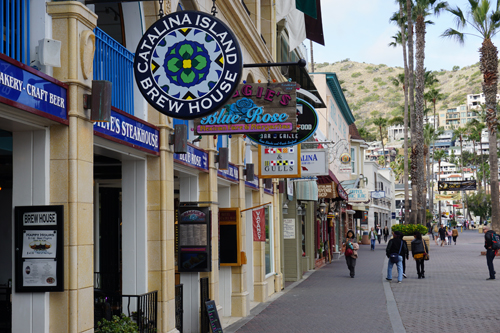