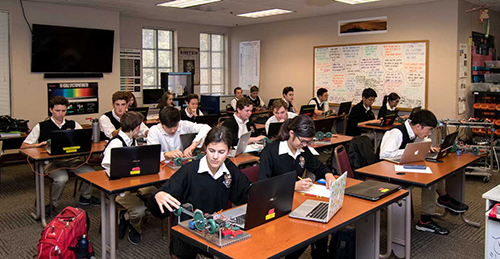 How are local private schools integrating STEM education into their classrooms?

The concept of Science, Technology, Engineering and Mathematics (STEM) has opened up the floodgates of practical and creative classroom learning.

“For the students, STEM is popular because it’s fun,” said JSerra Catholic High School Principal Eric Stroupe. “They get to be creative, to build and tear down projects, to try things without fear of failure, to solve problems in unique ways. Juxtapose that experience with an English class where you submit an essay that had better be pretty well-written from the get-go. Also, our students are not naïve to the fact that there is a demand for college graduates with STEM training. They, too, hear the stories of young engineers making a good living right out of college because they have the requisite technical training.”

There’s no single way STEM is being taught in the classroom, and some schools don’t even call it STEM. But the mission is clear: Integrate science, tech, engineering and math in education to encourage lifelong learning and practical application.

“For JSerra that includes classes such as Introduction to Engineering Design, Aerospace Engineering, Civil Engineering, Computer Integrated Manufacturing, Digital Electronics and Computer Science, among others,” said Stroupe. “We also have several club programs including Robotics and the Rocket Club, which engage students outside of class in STEM-related activities.” 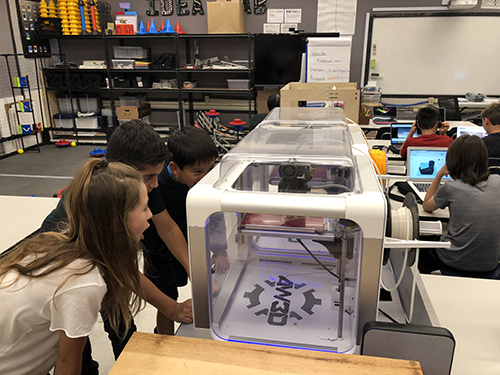 Photo courtesy of The Pegasus School

At The Pegasus School in Huntington Beach, STEM is taught through its Applied Computational and Engineering Skills (ACES) curriculum, according to Director of Technology Nyly Sy. The ACES curriculum is divided into seven different units and topics: Foundations of Computing, Network and Internet, Application Skills, Programming and Computational Thinking, Engineering Design, Robotics and Digital Citizenship. Lessons are geared to each grade level.

“In Foundations of Computing, students begin as early as kindergarten learning the external parts and ways to interact with the computer while the fifth-grade students learn the history of computers and take apart an old computer tower to learn about the internal parts of the computer and their function,” said The Pegasus School Computer Science Teacher Kathy DeBest.

Added Sy, “The rapid pace of technology creates a need for students to be taught the underlying principles and concepts of computer science. In kindergarten through eighth grade, students learn about computer science in a way that is age-appropriate, engaging and sets them to a path towards becoming responsible digital citizens.”

Sy said the school has also set out to address the issue of underrepresentation of girls in computer science and coding subjects. An all-girls competitive robotics team was formed this year, and the team already competed in the Girl Scouts of Northern California VEX robotics tournament held at Google headquarters in Mountain View.

“We wanted our girls to be brave and take risks, and we wanted them to make mistakes instead of trying to be perfect,” said Sy.

The Waldorf School of Orange County in Costa Mesa offers STEM curriculum set in the teaching style of Waldorf education. According to Biology and Earth Science Teacher Kim Eijpen this involves a two-hour main lesson at the beginning of the day, alternating between humanities, science and math blocks for every grade. She said math is taught throughout grades one through 12. While students in kindergarten through third grades study science through observations of the natural world and nature stories, including topics such as the water cycle and the plant cycle. In fourth grade there is a block on animal studies and in fifth grade it is on botany. Sixth-graders learn physics, astronomy and geology and seventh-graders learn physics, chemistry and human biology. Eighth-graders are taught physics, chemistry and anatomy.

“In the high school we teach traditional subjects in science and math,” said Eijpen. “Every year in grades nine to 12, students will have a four-week block in biology, chemistry, physics, earth science and math, as well as traditional math lessons throughout the year. Technology is taught and integrated in all of these subjects as a supportive tool.” 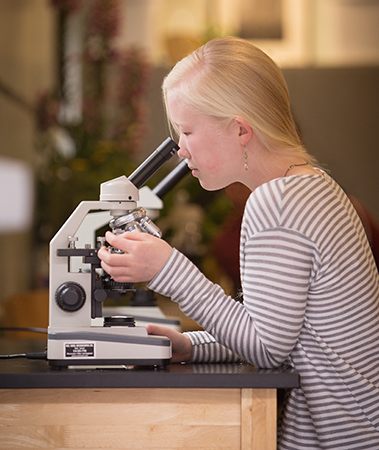 “The students experiment and analyze their observations, and are then guided to develop scientific concepts from their data and observations,” she said. “We have many field trips in the Waldorf School where we connect science with the broader world. For example, in both sixth and ninth grade, all students will go on a week-long geology field trip. … Students do not study from textbooks, but rather create their own high-quality notebooks. They record their observations and the underlying scientific concepts and emphasize their knowledge with illustrations/drawings.”

Fusion Academy in Huntington Beach also offers plenty of STEM education taught in the school’s unique setting in which students learn in a classroom ratio of 1-to-1 to help them learn at their own pace, according to Robin Podway, head of school. She added that students are able to share their work and their ideas in group settings.

“Fusion provides classes specifically in Robotics, Virtual Reality, 3D Printing and computer programming as well as courses that integrate these technologies such as Innovation & Design and Entrepreneurship,” she said. “Lots of kids are able to love learning again when their classes include virtual reality, or they are creating their project in 3D printing space, but the amazing thing we can do at Fusion is allow a student to follow their interests. We have a student creating his very own high-tech sneakers. He designed the foundation of the shoe in a graphic design setting, 3D printed the shoe … and is now studying the craft of stretching and sewing the leather. This kind of authentic learning makes kids feel powerful.” 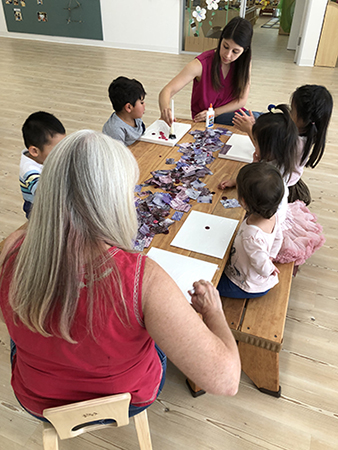 Of course, a discussion about STEM isn’t complete without including STEAM (the “A” is for art) education. While for some the idea of adding art in the STEM model might be controversial, Marco Polo Children’s School in Irvine is more than satisfied with this integrated approach. The preschool, which opened in January, is based on the Reggio Emilia philosophy, which has similarities to Montessori and Waldorf in terms of its nature-based focus on the children’s environment, but adds a strong emphasis on learning in different areas of development through hands-on, collaborative projects, according to co-founder Jack Hwang. Art and nature play large roles in the activities of the young children, ranging from 18 months to kindergarten age. On a recent afternoon, five children and their two teachers sat in the school’s art studio working on their projects. They used Elmer’s Glue to stick purple-toned fabrics and buttons on white art boards in whatever designs they desired.

But the lessons go beyond art—even when art is the method of transmission. Executive Director Josie Kuo said activities often involve recreating stories from books. One story involved cooking mung beans—which the children did. In the process of making popsicles, the children watched water freeze and then melt. Though they may not have realized it, they were seeing science in action. Another story—“The Three Little Pigs”—gave the students the opportunity to practice some engineering skills when they built a small house out of tree scraps.

“I think all the components of STEAM we touch on with our day-to-day projects with stories,” said Kuo.