You are here: Home / Activities / Summer Science Programs for Kids 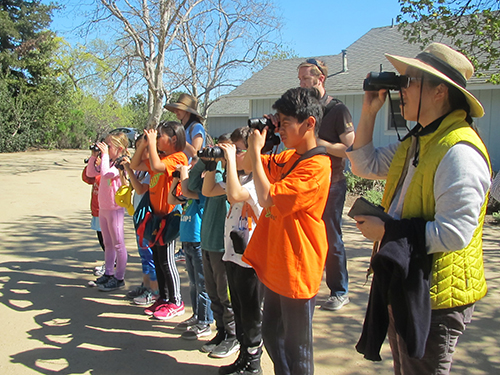 The ruddy duck is a diving bird. Its plump, cinnamon-colored body bobs on the surface of a pond at the San Joaquin Wildlife Sanctuary, supposedly catching its breath. Audubon naturalist Jay Miller points out the duck’s baby-blue beak, a beak so bright people have asked him if it was painted on. A collective gasp rises from the audience as it dips out of view.

Another cry is heard: “Look! An osprey!” The giant bird, wings poised in a shallow V, sails across the sky. But it wasn’t Miller who identified it: His audience has six young birdwatchers today, one of whom spotted it first.

These students are enrolled in a six-month course through Bionerds Inc., a science education company in Orange County. Several times a month, the classmates—all 7 to 11 years old—gather to learn about bird ecology and field research through the lens of citizen science.

The term “citizen science” refers to a research collaboration between scientists and the general public. Jessica Ballard, a Bionerds educator who designed the course, describes it as a hands-on link to formal education.

“Our students are seeing real-life applications of what can become abstract subjects in a classroom setting,” says Ballard. “We have students with a real passion for the material, and this is a way for them to visually connect and interact with what they learn.”

The core concept of citizen science is acknowledging that every person—regardless of age and prior experience—can impact STEM research in their own way.

Citizen science projects range far in scale and scope. The international website iNaturalist, which crowd-sources photographs of organisms in the wild, has collected 15 million observations since 2012. The Audubon Society’s Great Backyard Bird Count invites people to log bird sightings in their neighborhood, with over 20,000 participants this year alone.

Ballard wants her students to engage with research platforms as well. They are hanging bird feeders in their community to conduct seed preference surveys, as well as testing the pH and salinity of water from Newport Bay and Corona del Mar. At the course’s end, students will submit an article with their results to Cornell University’s BirdSleuth Investigator, a publication for young scientists.

“I want my students to challenge their ideas,” Ballard says.

The Sea & Sage Audubon Society in Irvine has called attention to the western snowy plover, a shorebird designated “threatened” by habitat loss and human activity. Moreover, the California Department of Fish & Wildlife lists 33 bird species as “threatened” or “endangered.” 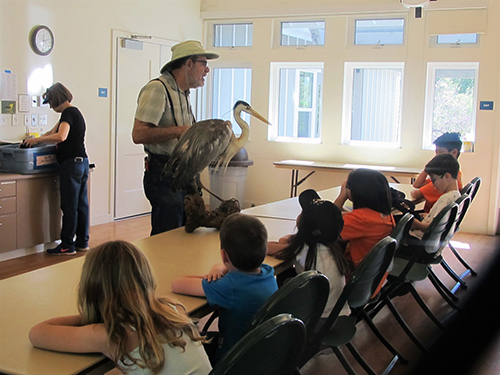 With these concerns, Ballard wants to expose her students to environmental issues and their effects on the avian—and overall—community. Inspired by current events and a documentary or two, the Bionerds Curriculum team created lessons on local watersheds, bird migration and threats to biodiversity.

“This course gives students the opportunity to witness environmental effects, and I hope it inspires them to change it for the better,” she says.

Bionerds President and Founder Diana Dizon says she wants her organization to take part in the movement to encourage citizen science in early education.

“With more data collected by students from different regions and backgrounds, scientific research can be more representative of the actual community,” says Dizon, a former researcher herself. “Science should be inclusive and accessible to everyone.”

Jay Miller, a past president of the Sea & Sage Audubon Society, says birdwatching can spark conversation about the outdoors.

“Kids are more interested (in birdwatching) than they used to be,” he says, referring to the growing number of Cub Scouts in his tours who engage with it. “Birdwatching enriches your life anywhere you go.”

On the San Joaquin field trip, students line up to test their binoculars on a faux red-tailed hawk. They are concentrating hard, listening to Miller’s cues about the focus knob.

Hannah Fung joined the course because she loves birds. Her favorite activities have been the field trip and salinity testing.

“I think citizen science is important because our knowledge can help decrease the negative impact of humans on the environment,” Fung says. “Also, it might be useful someday when you grow up.”

What advice does Ballard have for learning from the outdoors? Start small, she says.

“Find an area in your community where you can stop and look around. Try to notice the small things you wouldn’t normally catch if you were walking by,” she suggests. “Question why they are there, and how they interact with one another. This not only encourages curiosity, but allows kids to think outside the box.”