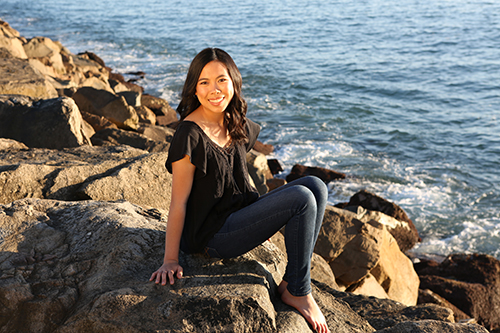 Kristen Nguyen was a sophomore at San Juan Hills High School when she met her first human trafficking victim.

During a 30-minute talk by Sharon Harrison, founder of Rescue One Foundation, Harrison revealed herself to be a former victim. Though Nguyen, co-president of the school’s International Justice Club, had helped organize the lunchtime event, the tale really struck the teen. And it sparked a big idea.

“She pointed out this happens everywhere,” Nguyen says. “She told me a story that was powerful about being a girl on the streets being picked up in a car.”

Nguyen had been a Girl Scout since she was in second grade, and through scouting, she learned about how to make a difference.
“I wanted to do something,” she says. “I was in such a fortunate area in Ladera Ranch, so I volunteered for Rescue One in Santa Ana in 2017.”

Nguyen met, prayed with, and offered a hotline number to about 10 young women while volunteering with the Christian organization. But she already knew there were other ways to fight.

She would try to make the same point to others.

“I wanted to get the word out that it does happen in Orange County,” she says. “I knew what I wanted to do and Sharon said she’d be happy to help.”

Nguyen was looking to complete the Girl Scout Gold Award, the highest and most prestigious honor in scouting. It’s only available to Girl Scouts in high school who have already completed their bronze and silver awards. Typically taking at least a year to complete, it requires leadership on an issue they are passionate about, and a sustainable, long-term positive change.

Her plan was two-fold: Organize a series of awareness nights about human trafficking in her community, then teach her underclassmen how to carry it on after she graduated. Generating enough publicity through the high school intercom and Ladera Ranch website, she was able to develop an RSVP list and fill a community clubhouse for two nights in the fall of 2017.

Her friend Harrison spoke as well as leaders from 1% No More! Inc., Action Force Network and Saddleback Church, and Nguyen set up tables for the speakers with brochures about their organizations.

“I did surveys before and after on what [community] awareness was. Before, they didn’t know what it was, but after, they said they would share the information,” Nguyen says.

With the money she raised from the events, she bought grocery store gift cards she gave to Rescue One to use with victims.

Nguyen, now a freshman at UC Davis, was one of just 107 OC Scouts to earn the Gold Award in 2018. But the payoff is bigger than her award.

“It’s still happening at San Juan Hills High School,” she says of the awareness nights. “I left it in good hands.”

The Orange County Register reported there were 284 victims of human trafficking in Orange County in 2016, virtually all were women and U.S. citizens.