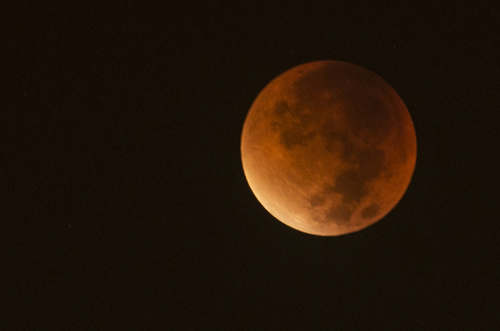 Bring science and nature home for your kids and watch the total lunar eclipse this month.

The Inca believed that lunar eclipses were caused by a giant jaguar attacking the moon and according to some, the people even feared that after it was done with the moon it would move on and attack Earth. Fortunately, today we have overcome the superstitions of the ancient world and understand that lunar eclipses are caused by Earth passing directly in between the sun and moon during a full moon. By tracking the path of the sun, moon and Earth we can accurately predict them years and even decades in advance. However, being able to explain and predict them does not make eclipses any less awe-inspiring. As famed astronomer Carl Sagan wrote, “In its encounter with nature, science invariably elicits a sense of reverence and awe.”

On Jan. 20, 2019 Orange County will get the chance to experience a total lunar eclipse from start to finish for the last time until 2025. While not as rare as solar eclipses, lunar eclipses are still infrequent enough that it’s worth making plans to see them. With the exception of possible clouds, we will have near ideal viewing conditions for this lunar eclipse here in Orange County, so it’s a can’t-miss opportunity.

When the eclipse begins at 6:39 p.m., look for the moon low in the eastern sky, it will be just to the north of due east. At the beginning of the eclipse the moon will be very low in the sky and only 18.6 degrees above the horizon. To see the beginning, you will need to be high up or have an unobstructed view toward the eastern horizon. To check if a location will have a clear view, you can use an old astronomer’s trick to measure height in the sky. Look to the east and find the farthest point you can see that is at eye level. Extend your arm fully, keeping it level at shoulder height. With a closed fist, align your hand, so that the bottom of your pinky is right on top of the object. The height of your hand, from pinky to pointer finger covers approximately 10 degrees of height in the sky. So if you add another hand’s height from the top of your pointer finger and see clear sky (not buildings, trees or mountains) then you will be able to see the entire eclipse from your location. However, as the eclipse continues, the moon will rise higher in the sky so even if you miss the beginning, you should be able to catch some of it from pretty much anywhere in Orange County.

The first phase of the eclipse is known as the penumbra and is when Earth only partially obstructs the light from the sun. At this time Earth’s shadow will only slightly darken the surface of the moon. The penumbral phase will continue until about 7:40 p.m. when the moon will be fully in Earth’s penumbral shadow. At this time the moon will have reached a height of about 30 degrees (three fist heights) and moved closer to due east on the compass.

Shortly after the penumbral phase is complete the umbral or full phase of the eclipse will begin, giving the surface of the moon a reddish color. The red shadow will begin to appear at the bottom of the moon at 7:38 p.m. and slowly work its way up the visible surface reaching full coverage at 8:44 p.m. At this time the moon will be relatively high in the sky at about 44 degrees above the horizon (almost five hand heights) and will have passed due east on the compass. Once the eclipse has reached its maximum, the umbral and penumbral phases will repeat in reverse order until the eclipse ends at 11:48 p.m.

While most locations in Orange County will be able to see some of the eclipse, here are some locations where you will be able to see the whole thing, from start to finish: Top of the World in Laguna Beach, Vista Park in Fullerton, Huntington State Beach between Brookhurst Street and Newland Street, and the Las Ramblas Trail in San Juan Capistrano.

Viewing an eclipse with children is a great opportunity for them to experience the amazing phenomena that is the movement of the planets in a firsthand way. Most kids understand the concept of casting a shadow and can connect it to their own experience, so seeing how the shadows of celestial objects interact can bring the concept of planetary motion to life in a way that is pretty much impossible under other circumstances. However, the magnitude of the event can also be overwhelming for younger children. In order to prevent that type of reaction, some advance preparation is necessary. First, make sure the younger viewers know what to expect. This is not the right time for surprises. There are thousands of great lunar eclipse pictures online and you should make sure they know what it will look like. The other thing that you can do to prevent younger viewers from getting scared is making sure they know exactly what is happening. There are plenty of animations on YouTube that simply and accurately explain how eclipses work and why we see what we do.

Eclipses are relatively rare events, but as long as it’s not cloudy you can go stargazing any night of the year. If viewing the eclipse inspires your family to learn more about astronomy, there are a lot of great resources in our area. OC Parks and the Orange County Astronomers club both hold regular astronomy nights and star parties open to the public. Also, the UCI Observatory is open on select nights throughout the year. The Tessmann Planetarium at Santa Ana College offers public shows daily, and inside the dome you are guaranteed to never have clouds. Be it in a planetarium, observatory or your backyard, astronomy and stargazing are great ways to bring the family together and learn about science and nature.