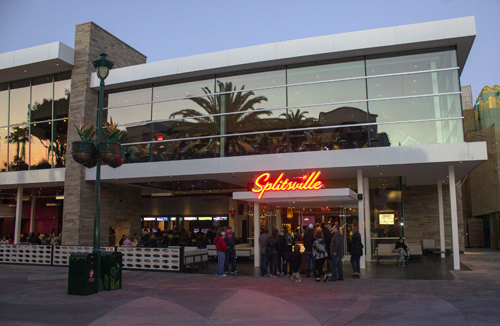 Goofy tried to bowl, but goofed up and instead, opened the newest place for families to have fun and eat at the same time at the Disneyland Resort. Splitsville Luxury Lanes, the newest addition to the Downtown Disney area, offers bowling as well as dining and drinks for the entire family.

“We see the Splitsville addition as a part of our evolution to transform the Downtown Disney experience into an extension of the family-friendly theme park experience,” said Brent Davies, the general manager for Downtown Disney.

The 20 bowling lanes are not all next to each other in the two-story, 40,000 square-foot building that stands where the House of Blues was once located. The lanes are grouped in sets of two, three and four throughout the structure on both floors, which allows families and groups to have some privacy, while having fun.

“We treat bowling as a game, not a sport. Our concept is for families or groups to do things together,” said Guy Revelle, co-owner of Splitsville. To that end, the bowling is by the hour, not by the game; with the amount of minimum time allotted depending on the number of people bowling together.

“We can take our time bowling. As part of a group, it’s way better by the hour,” said Matthew Fisher of Huntington Beach

While bowling, food and drink is ordered from the service staff, and brought to the tables conveniently located behind each set of lanes. Food options include family friendly fare like pizza, burgers, nachos and chicken nuggets, but also include more adult options, such as a variety of sushi offerings.

“It’s fun interaction to share the food. The sushi is good and the portions are definitely sharable,” said Pamela Mann of Arizona.

Family-friendly beverages ranging from sodas, Coca Cola Freestyle and three flavors of Icees are available. For adults, there are a variety of beers, pre-made cocktails, and specialty mixed drinks, such as an Old-Fashioned Elder, from the full-service bars. At night, the outdoor patio has live entertainment on its stage, visible from an outdoor dining area, complete with a fireplace for cooler evenings. For those wishing to just eat and not bowl, there are several large dining rooms; the second-floor dining area has a view of Downtown Disney. Adults can drink and dine at the two large full-service bars too.

Disney decided to bring the concept to California following the successful opening of a Splitsville establishment at Walt Disney World in Orlando. The family-friendly approach extends to the way the lanes can be set up, with automatic rails that can extend into place when kids bowl to keep their ball from going into the gutter. There are also metal devices the small kids can use to send their ball to knock down as many of the 10 pins as they can when it’s their turn. Bowlers can bring their own balls and shoes, or use those provided by Splitsville; the lighter bowling balls at the lanes have images of Mickey Mouse or Minnie Mouse on them. There are currently no plans for league bowling.

Learn more about Splitsville Luxury Lanes at their website: www.splitsvillelanes.com.