You are here: Home / Entertainment / Pride of OC

Teen Superstars and the Moms Who Raised Them

Few things invigorate a parent more than watching their child score a winning goal or nail a test they studied hard for. Imagine then, the excitement of helping a child reach celebrity-level success. Meet three OC 15-year-old super-talents, and the moms who guided these rising stars. 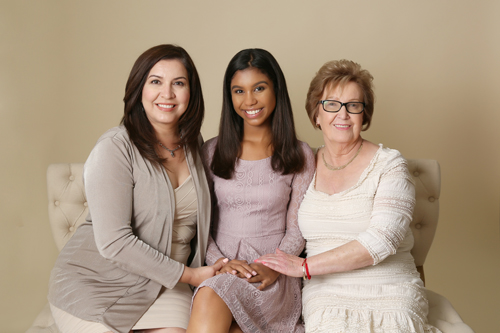 “Oh my gosh, Blake Shelton, Adam Levine, Gwen Stefani and Alicia Keyes are saying my name…because they know my name. That’s crazy! I am still pinching myself. And they are so gracious and humble and just, normal! I am incredibly grateful for all of their support, I can’t believe I am still here. I am so humbled to be in the Top Twelve and just want to keep improving and doing my best.” It is this endearing mix of exuberance and humility that has the country standing behind this little powerhouse as she blows away the judges, screaming audience, and over 17 million viewers with her vocals.

Reaching this point has not come as easy as it appears on the television screen. When asked about the seemingly effortless nature of her big voice, Aliyah giggles in surprise. “Wow, honestly, that is a huge compliment if it looks easy. I actually work really, really hard. Years and years of practice and lessons and performing everywhere I can, it all goes into making it look easy.”

The young performer has had a few witnesses to the hard work and dedication toward her dream — Aliyah’s biggest supporters, her mother and grandmother. Losing her musician husband to cancer a mere month after Aliyah was born added to the challenge of motherhood. “It happened so quick,” says mom, Martha Jimenez. “He didn’t want me to know because he found out while I was pregnant. He hid it because he didn’t want to stress or upset me in the early stages. He only let me know of the diagnosis four months before he died, when it became obvious this wasn’t just going to go away.”

Family on both sides rallied to support the young mom with a newborn and grieving son. The same family that stepped in then, has now joined forces again for a joyful reason, to help Aliyah navigate her way through sudden stardom and life on the show. Aliyah’s mom is a fulltime public school teacher, so when she is with her class, aunts on both sides and Aliyah’s grandmother help with transportation and chaperoning as she preps for the show and tapes on set.

“I would not be here if it weren’t for my mom and grandma,” says Aliyah. “This has given me a deeper appreciation for the sacrifices my mom has made to let me follow my dream. She keeps my head straight and keeps me humble in the midst of all this glitz and glam.”

Martha, understandably, believes in public school and that education comes first. Fans chuckled as the cameras caught a candid chat between Aliyah and Blake Shelton, her coach on the show, as Aliyah asked how his big LA concert went. When he pressed why she didn’t just come see for herself, she explained she had homework that night. Martha has done her best to keep her daughter grounded, but it is clear the foundation for her daughter’s sweet, humble nature was laid long before the chairs turned during Blind Auditions.

It was during those auditions that Aliyah had a difficult choice. Gwen Stefani, Alicia Keyes and Blake Shelton all turned their chairs, in a bid to woo her to their team. Aliyah’s instant connection with Blake made the choice easy. “He is so humble. He’s hilarious. I don’t know what I would do without him. Hearing him talk to me and acknowledge me as a friend. I am so happy. It’s so crazy that this is real life!”

Although Aliyah’s dream is to come out of her experience at The Voice with a recording contract and kick-started future as a performing artist, she has already secured one souvenir she considers priceless — a friendship with fellow OC The Voice teen, Hanna Eyre. “Hanna is the sweetest person I have ever met, period. We have become so close. It’s funny, because we lived so close and never met. Now I have this amazingly talented new best friend. It’s just a huge blessing I wouldn’t have if it weren’t for The Voice.”

What comes next for Aliyah? “Well, there’s only one winner — it comes to an end for the 47 of us, other than that one. I am just enjoying the journey and ready to see what’s next.”

Hanna Eyre’s powerful debut performance on The Voice earned high praise from a panel of celebrity judges and rambunctious cheers of approval from a packed studio audience. But none could match the enthusiasm of Frances Eyre, who tearfully bounced up and down as her daughter advanced to the next round again and again.

“It makes me so proud,” says Frances. “It amazes me. She’s just a normal teenager but when she gets on that stage, she becomes a different person. You can see how much how much she enjoys performing and singing and you can see the joy on her face. There’s nothing better as a mom than to watch your children doing what they love and doing it well.”

It’s a feeling Frances gets whether she’s watching her daughter perform on national TV, cheering on her sons at a basketball game, or accompanying her younger daughter on a nature hike. The challenge is to find the time to do it all.

“Having four kids, you already are super busy managing every child’s activity and school work,” says Frances. “The struggle with The Voice was being able to get everybody where they needed to go, find a balance, and still spend time as a family during that amazing experience. We tried to have as many meals as we can together, watch a movie together, take a quick trip, or do anything we can to make sure we have the time to spend together as a family.”

Frances says she and her husband worked hard to ensure all their children were getting equal attention. To accomplish this, they sometimes split up so one could watch some of their kids play basketball, while the other watched Hanna perform. When there’s no scheduling conflict, they attend events together and make it a family outing.

The whole Eyre clan was there to cheer on Hanna during her big performance.

“There wasn’t any jealousy or animosity between the kids,” says Frances. “They’ve all been super excited about this journey and they feel like a real part of it. It’s a fun time for us right now.”

Frances always hoped her children might be musically inclined, and got her wish with Hanna, who was naturally drawn to music. She was five when her mom began teaching her piano.

“Having my mother’s support and encourage means everything to me,” says Hanna. “Having the whole family behind me and helping me along the way was amazing. My family — and my mom especially — is always encouraging me to do my best. Hard work and being self-sufficient is really important in our family.”

With her mom by her side, Hanna feels like she can accomplish anything. “The best thing my mom every told me is that when you put your mind to anything — if you work through anything with determination — you can make it happen. She’s always enforcing that determination — not giving up on your passions and not giving up on what you want in life. That advice helps so much in life and when I was in the competition.”

Hanna’s ever-present joyful smile never wavered, despite narrowly missing the cut for the top twelve. Her positivity suggests she has a bright future ahead.

“Being on the Voice has really been one of the most amazing experiences of my life.,” says Hanna. “While I am disappointed that I cannot continue on to show America more of what I can do as a vocalist and musician, I am forever grateful for so many things that have come as a result of being on the Voice. I met so many amazing people from the show that were not only talented, but also they were genuinely good people.

“I met Aliyah Moulden who has became one of my closest friends, and I know we will be friends for life. Sheena Brooke, my battle partner, was so fun to get to know, she is like a big sister to me and we still occasionally keep in touch.”

Hanna also knows that when it comes to this industry, making connections and learning from the top talents will serve her well down the road.

“I was also able to work with the best in the business when it comes to stage production, vocal teachers, hair, wardrobe and makeup professionals,” says the teen. “It was a real dream being a part of this journey on the Voice and I will always look back on it fondly.” 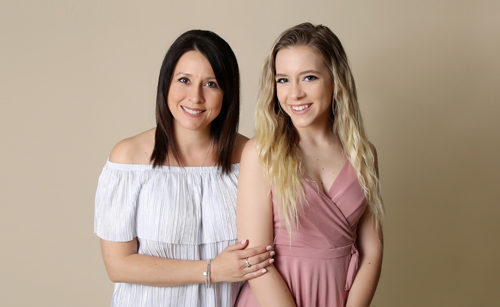 At age 15, singer Madysyn Rose Vale has already amassed more than a million followers. But of all those, there’s one who’s most devoted of all: her mom. Or, as some call her, her mom-ager.

Sherry Vale, a Huntington Beach mom of five, is the magic behind the Pop Game star’s success. She chauffeurs Madysyn back and forth to gigs, manages her schedule and ensures she stays grounded as she works toward superstardom.

“She’s always supported me and encouraged me,” says Madysyn. “I feel so lucky. It gives me a really big advantage because she’s so supportive.”

While many of Madysyn’s fans are relative newcomers who discovered her on the A&E Timbaland-produced reality show, Sherry has been by her side since her the beginning. From cheering her on at school talent shows to enrolling her in singing lessons, she’s worked hard to embolden her daughter’s love of music.

“We call her our songbird,” says Sherry. “All she does all day long is sing. We knew there was no other plan for her than that.”

For Sherry, supporting her daughter’s budding career has come at a price. The time she spends driving Madysyn back and forth to Los Angeles for rehearsals has taken her away from the rest of the family.

“It was a sacrifice and I think it’s paying off really nicely,” says Sherry. “Things are going very well. Big things are happening for her. For balance, I make a conscientious effort to optimize the time I spend at home with my other children, aged 7 to 21. I think it’s important to make sure each kid gets one-on-one attention, whether it’s taking one shopping or taking them to the ice cream store. You have to make sure that you’re constantly aware that each child needs attention.”

When it comes to managing Madysyn’s career, Sherry believes she’s the best person for the job.

“I have her best interests at heart,” she says. “I know her like nobody else knows her. I am so proud. I’m always telling people to listen to my daughter sing. She’s an amazing girl, a sweetheart and she really loves to make people happy.”

By Sascha Zuger and Michelle Thompson