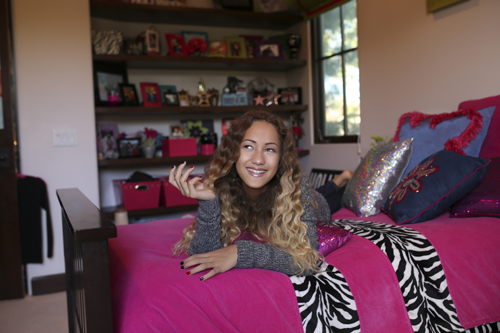 With mom, Kara, as her guide, the talented 12-year-old is poised for takeoff, but with her feet firmly on the ground.

The bubbly twelve-year-old answered her door for our cover shoot, barefoot in jeans and a plaid flannel shirt, struggling to contain the impossibly cute fluffy dog wiggling in her arms. “Come in! Thank you so much for coming! This is Sasha.”

“Oh gosh, right!” She giggled, “But she’s named after Sasha Fierce. I love Beyonce — she’s such an inspiration.”

Skylar is not so different from millions of other girls her age, except this young singer-songwriter-performer just might have the talent to follow her superstar idol. With over 10 million views of her original videos and songs on YouTube, and Radio Disney supporting her rise in the industry, Skylar Stecker could one day have a bevy of fluffy toy dogs named after her, too.

And none of this could have been a bigger surprise to her own mother, Kara Stecker.

“When she was nine, Skylar signed up for her school talent show to play the piano,” says Kara. “During the audition, the teacher asked that she sing along with her piece. When they posted the lineup, she was listed as a singer. We felt bad for her. We thought maybe they already had too many piano players.”

The night of the performance, Skylar’s mom, dad (former pro-NFL player, Aaron Stecker) and younger brother went to support her through what they feared would be an embarrassing event. And then she opened her mouth to sing. “The crowd was in awe. We had never even heard her sing! She had this huge voice she was hiding from us.” With no family history of performers or voice talent, the Steckers were shocked. And from that first performance, Skylar was hooked.

“Right after I did the talent show, I just knew that this was what I wanted to do forever,” says Skylar. “I know I’m only twelve, but that was the most major decision of my life that night, deciding I wanted to be a singer. Major. It was so cool to be so young and just know.”

Despite being only nine years old at the time, Skylar began working toward her dream with uncommonly mature determination.

“When she said ‘this is what I want to do forever’, we’re like, uh huh. Sure,” says Kara. “This is a nine-year-old. Nine-year-olds change their mind every other day. The day before that, she wanted to be a vet. And before that was something else. So we let her try singing lessons. She did one national anthem and that anthem led to another and another and another and pretty soon, she was doing college-level games and then pro games… all before the age of 10. Very quickly it became apparent that she was serious.”

But relocating an entire family across the country based on the big dreams of a member who had yet to hit double digits seemed crazy. “It was a huge leap of faith. So I put up a hurdle for her, wanting to see how she could handle it. She would have to show me she could balance it all. I brought her to a regional talent contest with thousands of contestants from all over the nation. She won every competition. She won the singing competition, not just for her age group but out of the adults, too. There was a small chance an agent or manager might take notice. She had 48 calls that day. I went home and told my husband, ‘You’re not going to believe this. She won everything.’”

So the family headed to California. First opting for a furnished apartment in Irvine, they planned on giving it six months.

“I thought when we got here and she wasn’t the big fish in a little pond anymore, she might crumble. But it did the opposite; it just made her more driven. Wanting to absorb more, like a sponge, she loved being around all these other really talented actors and singers. She begged for more classes, to learn more.”

Skylar dreams of songs on the charts, making records and hearing her music on mainstream radio, but she’s not looking for a free pass to that level of success.“I take singing lessons, piano lessons, dance lessons every week. Most of the time we’re in LA and I’m performing, or working on my album or my writing. Every day of the week it’s something to do with singing, which I’m not bothered by — I love it. It doesn’t seem like work to me because it’s so fun.” 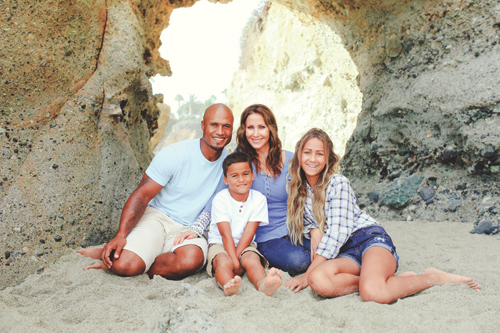 Skylar with her little brother, mom, Kara, and dad, Aaron, at the beach.

With most of her work-related obligations located in LA, some might wonder why OC. “We picked Orange County because there aren’t a lot of local people in the industry,” says Kara. “People here are just working and doing their thing. I wanted her to always know that there’s a shift. We go to LA and do work, but we shift when we come back here. She’s back to normal, she does her homework, she does chores around the house, plays with her brother — when we walk through that door, the music stuff, my helping manage her career stops. It’s fair ground and everything goes back to normal in how our family runs and what she’s expected to do. She’s got to do the dishes and walk the dog. It’s about balance and keeping everything normal while keeping the music side completely separate.”

Skylar’s dad, Aaron, had the most concerns about the move. But they quickly found their OC family. “He was the person who was really worried about moving to California. He had his doubts, but now he loves it. We’ve learned it’s all about who you surround yourself with. There are great people in Orange County and we have a wonderful support system in LA. My son has no interest in performing, but he loves that he can play sports year-round. We wanted to make sure he was loving it. If Skylar was happy and he wasn’t, that wasn’t going to fly. It’s a family decision and after six months, we all loved it so much we put the Wisconsin house on the market and moved here for good.” 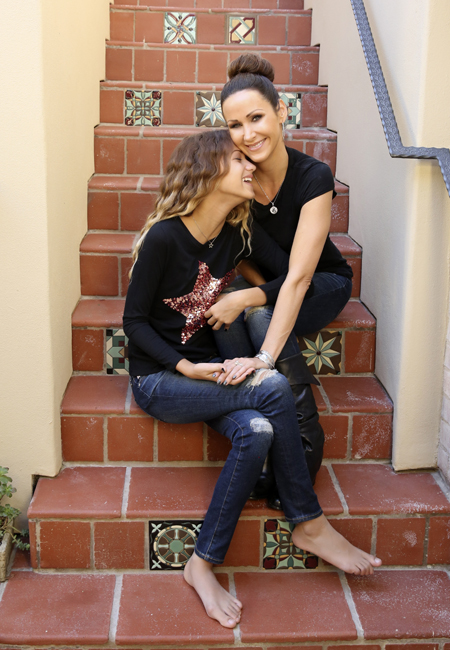 Skylar goofs off with her mom, Kara at our cover shoot.

Being the parent of a rising star can get complicated. Skylar seems to be well adjusted, hanging out with friends at Blaze Pizza, shopping at Fashion Island or the Irvine Spectrum, reading, cooking for her family, but Kara keeps a close eye on her emotional happiness.

“I told Skylar, if I ever hear you start questioning yourself, the way you sound or your talent or look — what’s wrong with me, why didn’t they pick me — if any of those words ever come out of your mouth, or I even sense you’re feeling it, we’re not doing this anymore. That’s not what this is about. You’re 12 and if it’s not fun for you, we’re not doing it.”

Kara achieved this balance by carefully choosing who to bring into Skylar’s professional life.“She’s surrounded by a great little team. They are like family and really care about her long-term and not just some quick what’s-good-for-them-to-make-money success. They allow her to be who she is and don’t try to change anything about her. That, to me, is key. They allow her to do her writing, something that was really important to her.”

In fact, when asked what her proudest accomplishment was to date, Skylar cited not the masses applauding her during concerts and engagements, but her writing. “My writing has grown so much from where I started. I started writing about a crush, now I put myself in other people’s shoes and write about some serious things. I’m a really happy person, so my mom wonders where it comes from sometimes. I’m just so grateful that I have the gift to be able to sing and also write. We just finished my album and I wrote all of the songs.”

Although Skylar first went to public school in Irvine, her schedule made it difficult to keep up with her studies and not fall behind with music opportunities. So with the same determination she used to convince her parents to create her own YouTube channel and move across the country, she talked her mom into homeschooling by suggesting a trial period in which she maintained her A and B average along with her household chores. 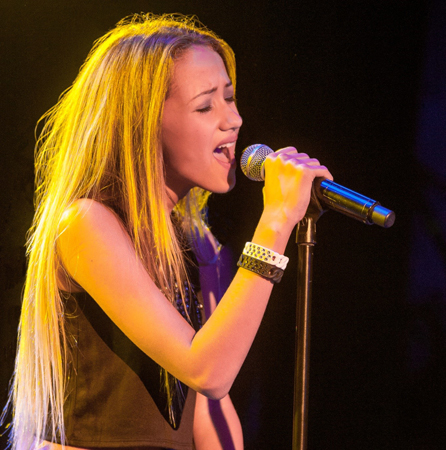 Performing at the Roxy in November, Skylar not only performed, but wrote all of the songs on her EP, ‘Firecracker’ to be released this month.

Life in the Public Eye

Within minutes of meeting Skylar and her mom, the closeness of their relationship is obvious — from their spontaneous hugs right down to their matching jeans. But raising a tween in such a public manner requires extra consideration, such as the need to monitor interactions with her fans.

“Skylar’s probably the only person in Orange County who doesn’t have a phone, I feel like she doesn’t need it and if she needs to call someone or text a friend, she just borrows mine. Everything runs through me. I have to see everything she posts, so everything has to be appropriate.”

Skylar doesn’t seem to mind, but acknowledges there are times they butt heads, particularly when it comes to apparel or lyric choices. “We have disagreements all the time. She knows what she wants her image to be, but I’m also her parent and at times I have to reel it in. I pick my battles very carefully because I respect her creativity and want her to still have her own sense of who she is. I’m not trying to make her into a boring old person like me.”

Skylar pipes up, “You’re not old…And you’re not boring!” Skylar dissolves into giggles at the thought.

“She respects my advice, because she knows I don’t say no to everything,” says Kara. “I say no when I know it should be no. It’s a fine line.”

And by the beaming smile on Skylar’s face as she snuggles into her mom’s shoulder, it appears Kara has found it. 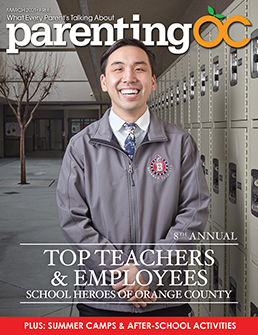