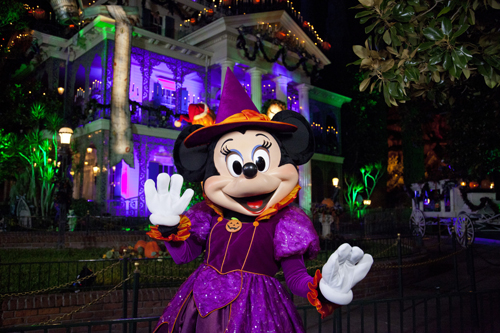 Terrifying costumes and haunted houses are everywhere during October, looming like the plague for kids frightened by Halloween. It’s important to have family-friendly events showing children why Halloween can be fun — and no one does this better than Anaheim’s Disneyland Resort. Halloween transforms the park into an exciting blend of pumpkins, fall colors and “new” rides. Even the treats get tricked out, as candy apples become Mickey pumpkins or Minnie witches, cakepops feature Mickey as a mummy and pumpkin fudge abounds.

As you enter on Main Street U.S.A., the Pumpkin Festival displays hundreds of hand-carved pumpkins along the street. Big Thunder Ranch hosts the Halloween Carnival, an ideal spot to stop for a magic show or some holiday-themed arts & crafts. The “Astounding Cauldron of Magic” sideshow allows little ones to conjure up their favorite Disney villains and other characters will stop by in their Halloween best to greet youngsters. Onsite professional pumpkin carvers create Disney-inspired squash masterpieces and visitors can experience the Dia de los Muertos exhibition in Frontierland, displaying colorful altars and sugar skulls.

Rides take on a holiday slant, as residents of Tim Burton’s Halloweentown from “The Nightmare Before Christmas” move into the Haunted Mansion through Oct. 31, mixing Halloween spook with a little Christmas cheer. The Haunted Mansion Holiday, featuring the infamous Jack Skellington, has been a longtime favorite of Disney’s Halloween Time. This year’s hidden gingerbread house, the 14th of its kind, will feature a gingerbread zombie trapped inside surrounded by red and white candy cane spikes. Across the park, Tomorrowland’s Space Mountain Ghost Galaxy throws riders into a spooky spot of space fun, complete with ghosts, scary sound effects and creepy music.

A separate event is Mickey’s Halloween Party, where the whole family can dress up and trick-or-treat in the park. The party will occur 14 times this year, offering little ones healthy treats as well as candy. Jack Skellington hosts a unique firework show called “Halloween Screams” where Zero replaces Tinkerbell in the flight from the Matterhorn. Kids boogie with Mike and Sulley from “Monsters University” in their Tomorrowland dance party and watch Mickey’s costume party parade filled with familiar “faces”.

Villain’s Square, aka Town Square near the park’s entrance, features fave baddies like Cruella De Vil, Jafar and Maleficent for photos and greetings. Their arrival will be one to remember, with a horse-drawn carriage floats in a halo of fog and thunder to thrill guests. Rides will also be running with lines likely to be much shorter than during the day, for a relaxing way to enjoy the park. 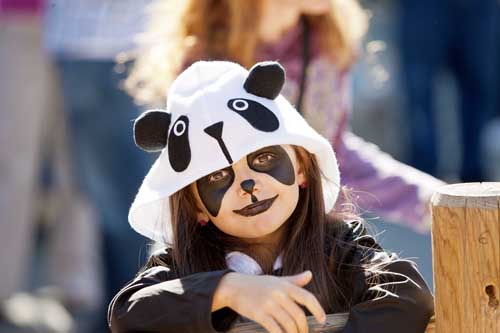 Camp Spooky is a great not-too-scary alternative to Knott’s Berry Farm’s late-night Halloween Haunt. Each weekend in October, Camp Snoopy is transformed into Camp Spooky, where kids can find cheer in the creepiest of all holidays.

The highlight is the Halloween show in the Camp Spooky Theater. In this year’s production, titled “The Monsters are Coming, Charlie Brown”, the Peanuts Costume Parade welcomes children wearing costumes to traipse around the theater with the Peanuts characters and colorful monsters.

Camp Spooky also has interactive elements, ensuring that little ones are a big part of the festivities. The Mini Monster Maze gives mini-visitors a chance to earn tasty holiday treats through obstacle course challenges. In Mummy’s Manor, kids create their own monster with interchangeable body parts while Medusa’s Bug Boutique teaches about creepy crawly bugs through fear-free funhouse mirrors. At the Witch’s Tea Party, Kool-Aid “friendship potions” are mix-and-matched in test tubes to be taken home and enjoyed.

In addition to the fun in Camp Spooky, the theme park’s famous Calico Mine Ride is made over during the Halloween season to become The Witch’s Keep, a ride where the Green Witch uses a secret power source found deep in the mine to corrupt those who enter on the slow-moving train. The ride features special scenes as well as enhanced lighting and effects, bringing some mild Halloween fun to the rest of Knott’s. 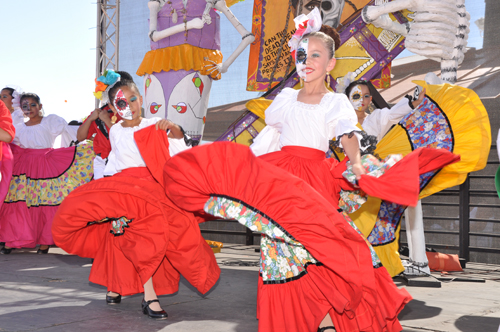 Trick or Treat Festival at the Orange County Marketplace

The first 500 kids to arrive in a costume at “It’s a Monster Mash!” will receive a free bag of treats complete with tickets to local attractions. Trick-or-treating at the fairgrounds from 10 a.m. to 2 p.m. along with free arts and crafts, face painting and the “Hilarious Halloween Haunt” puppet show hosted by Franklin Haynes Marionettes, keeps little ghost and goblins busy.

Unique activities round out the fun. Farrell’s Ice Cream Parlour sponsors an annual “I Scream for Ice Cream” contest, giving kids a chance to show off their scariest screams. Doug Goodreau, an expert in pumpkin carving from Peculiar Pumpkin Portraits, shows off his Thai fruit carving techniques to create monsters and other spooky creatures. Relampago del Cielo Grupo Folklorico takes the stage to perform traditional Mexican dances in a Day of the Dead tribute and the Southern California Herpetology Association and Rescue displays a collection of creepy creatures, including reptiles and spiders.

The festival doubles as the 15th annual Halloween Hearse Show, a showcase of hearses and other funeral cars as well as ambulances and limousines. Bugs and Monsters sideshow presents vintage Volkswagen beetles and bugs as well as rare Cobras, Spiders, Vipers and Baracudas for auto-fans to enjoy. The focus is on black, orange, green and white cars, living up to the show’s Halloween theme.

Werewolves might growl, but bellies certainly won’t. Snag a snack from the gourmet food trucks before a stroll through the on-site pumpkin patch. In keeping with the Halloween spirit, you can also donate some of your precious blood at the LifeStream blood drive — a good cause in the midst of all the excitement. 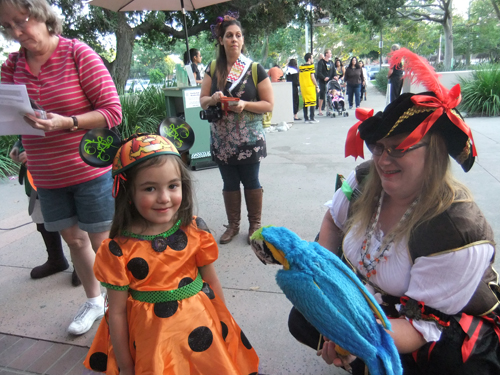 Boo at the Zoo at the Santa Ana Zoo

The Santa Ana Zoo’s annual Halloween event, now in its 24th year, encourages kids to be kids as they celebrate the spookiest day of the year. The zoo provides a safe environment for all members of the family, priding themselves on their self-proclaimed “merry not scary” event. Older kids can join the fun, heading off to the “Teen Scream”, a haunted house perfect for more adventurous children who aren’t afraid to get a little creeped out.

Come prepared to travel down Trick-or-Treat Trail in your best costume. Along the trail, 10 stations offer delicious treats and prizes for little ones to collect. A nightly parade led by the zoo’s mascot, a monkey named SAZOO, allows a chance to show off your Halloween look among a sea of admirers.

Other Boo at the Zoo activities include Halloween-themed games, sing-a-longs and storytelling – naturally highlighting a critter theme. Zookeepers will host animal presentations, allowing guests to get up close with nocturnal creatures. Rides like the “Boofari” Express Train and the Conservation Carousel will run and the Tustin-Santa Ana Rotary Club will be selling hot dogs, chips and soda. 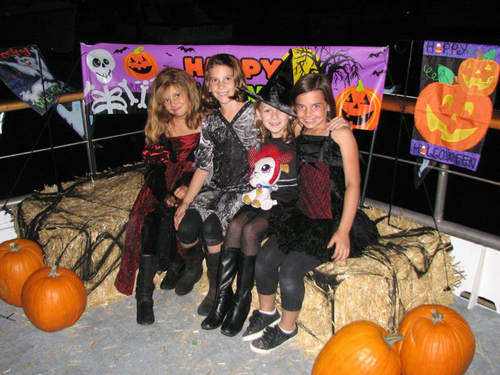 Boats float eerily back and forth across the water, covered in hay bales, pumpkins and “Happy Halloween” banners – a spectacle that has been thrilling visitors with trips around the haunted harbor for six years. As you head out for a night of spooky fun, be sure to dress to impress as each cruise offers its own costume contest for kids. In lieu of trick-or-treating on the ship, there will be goodie bags available for little ones to make sure they get their fix of Halloween snacks.

Dana Wharf Sportfishing and Whale Watching donates the crew and the boat for the evening. Cruises leave the harbor every 20 minutes and the $5 entrance fee will benefit the two local nonprofits that are responsible for organizing the event. Us Too Gymnastics, an athletic center that focuses on providing fun gymnastics classes for children with developmental delays and disabilities, and Community Autism Now, who offers personal assistance for families affected by autism, both strive to help special needs children in the local community. 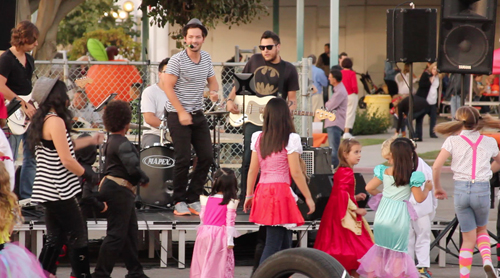 Trick-or-treating nearly always involves kids walking around neighborhoods getting candy from people they may or may not know. A situation that might be scarier for parents. Seacoast Grace Church’s Trunk or Treat changes that completely, giving kids a safe environment to wander in their witchy and wizardly best. A giant parking lot at the church is filled with over 60 cars specially decorated for the event. Children visit each car to receive individually wrapped candy from known members of the church community.

It is free to “trunk or treat” with other events happening at the site. Climb aboard a truck and sit amid the straw for a classic fall hayride or sample fair food and funnel cakes. Carnival-style game booths, a giant slide and thrilling bounce houses ensure kids have a chance to get some energy out. Remember your night of holiday fun in Cypress with pictures from the photo booth, or get photos taken with some of the Disney princesses, who will be on-site spreading some Halloween cheer. 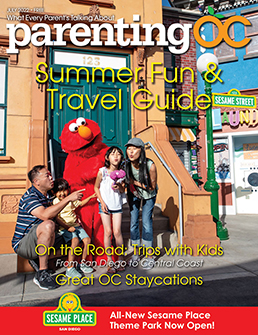