You are here: Home / Holidays / How to Throw a Harvest Party: Food 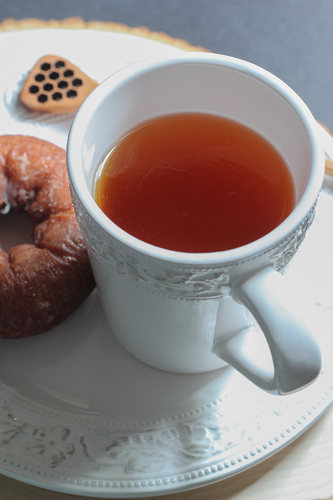 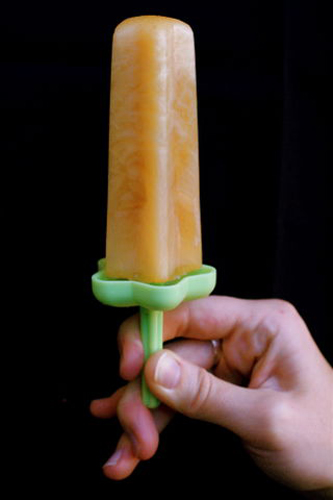 Hot vs Cold: Mull It Over

When the weather cools and the leaves change, it’s time to cozy up in sweaters and scarves. Another wonderful way to stay warm is with this tasty fall tradition — hot apple cider. Keep it simple: heat four or five cups of apple juice on low heat in a saucepan. Combine some cinnamon, nutmeg and allspice in a piece of cheesecloth then tie it up and drop it in to the juice. Stir the mixture, pour into mugs, garnish with a cinnamon stick and voila! Deliciously hot cider.

A unique alternative to hot apple cider is homemade apple cider popsicles. Create the cider as described, adding some extra water and sugar. Once the sugar dissolves and the mixture reaches a boil, add some vanilla and remove it from the stove. After it cools, pour it into a popsicle mold and freeze. This creative treat blends the best parts of the summer and fall seasons.

Once you’ve mulled your apple cider, you can even spice up other recipes to add that unique pop of fall flavor. One favorite is the apple cider donuts. If you’re short on time, simply boil a cup of the spiced cider until it condenses down to a third of a cup and add to a boxed baking mix (like Bisquick or Jiffy) donut recipe and drop spoonfuls of the sticky mixture into hot oil. If a healthy option is preferred, drop into a mini-muffin tin and bake. After a quick dip in cinnamon sugar (just put into a large ziploc and let the little ones shake away), they make a pretty convincing cider donut hole.

If you’re a purist, opt for a rolled donut recipe and swap in 1/3 cup of condensed cider mixture for some of the milk and toss in a few extra tablespoons of flour to help stiffen the mix. Refrigerating the dough before rolling will also help cut down on the stickiness. Although traditional donute recipes are a little more involved, little hands will love being part of the action with the rolling and cutting of the dough. It’s not likely you will have a donut cutter, but a glass dipped in flour does the trick nicely. A flour-dipped film canister or napkin ring can be the center hole. 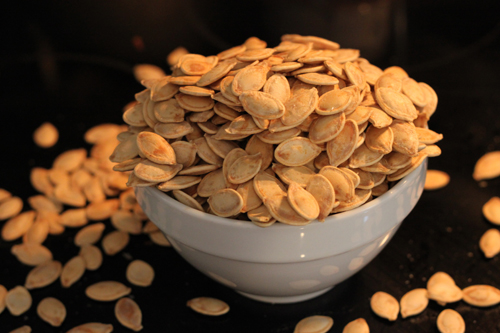 These are easy and fun to do, and can add another dimension to cooking with kids around Halloween or Thanksgiving, the height of pumpkin season.

Preheat an oven to 325º F degrees. F. In a frying pan over medium high heat, heat the oil. When it is hot, sauté the seeds, stirring frequently until lightly browned, for about 5 minutes. Using a slotted spoon, transfer the seeds to an ungreased baking sheet and spread them in a single layer. Sprinkle with the salt and bake until crisp, about 15 minutes. Transfer the seeds to paper towels and let cool. Store in an airtight container for up to 1 month. (Makes 1 cup.)

Homemade pumpkin purée is easy to make and older kids can lend a hand — just make sure you use a Sugar Pie variety, not jack-o’-lantern types which are fibrous. Your finished product can be a great base for baby food, or add a half cup and sprinkle of cinnamon sugar to your favorite pancake mix for a seasonal fall flair to your flapjacks.

If you are using a three or four pound pumpkin, bake it whole on a baking sheet in a 350° F oven until a sharp knife easily pierces through to the seed cavity, usually for 1 to 1 1/2 hours. For larger pumpkins, cut in half or into wedges before baking, and bake the pieces cut side down on a lightly oiled baking sheet.

When the pumpkin is cool enough to handle, peel away the skin, cut in half, scoop out the seeds and fibers, and mash the soft flesh with a potato masher or process in a food processor. If the purée is a bit watery, slowly cook it in a saucepan over medium heat until the moisture has dissolved and the pumpkin is dry. This is an important step, because dry purée is best to work with when combining with other ingredients such as flour. 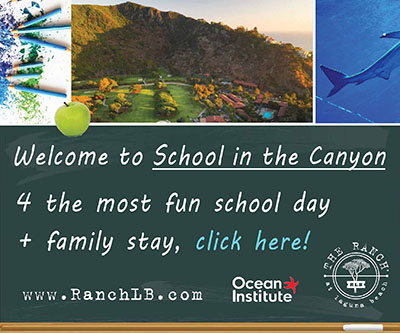