You are here: Home / Community / Share That You Care Day 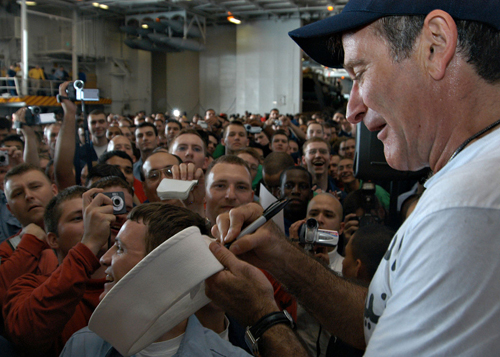 The passing of beloved comedian and actor Robin Williams left the nation in shock. Many began to question how someone who appeared so lighthearted could have been battling such a dark illness. The overwhelming response to his death highlighted how many people loved and cared about the actor. For many, his films brought a joy and happiness that helped them through their own trying times.

Upon learning of his death, Sandy Segerstrom Daniels, founder of The Festival of Children Foundation and the September issue’s Local Hero, wondered if Williams had known how much love the world held for him.

“If the wonderful things being shared about Mr. Williams had actually been told to him by those close people, could the circumstances have been different?” This question led Daniels to an idea. A day dedicated to reminding the people in our lives how much we care for them; a day she would entitle “Share That You Care Day”.

The premise behind “Share That You Care Day”, held this past Saturday, was simple; take one day to express your love to those you care about. This movement aims to remind everyone of how important it is to take the time to remind loved ones of just how much they mean to you. By pledging involvement, participants committed to reach out to all those in their life who meant something to them. It was as simple as a phone call, text, visit, or even posting to social media with the hashtag #sharethatyoucareday, for others to see.

According to the Suicide Awareness Voices of Education (SAVE) foundation, nearly 30,000 American take their lives annually. Robin Williams was just one of thousands who have lost a battle with mental illness. Treatment, medication, and the love and support of family are all methods to prevent suicide. Share That You Care day was an opportunity to remind people they mattered, and to help prevent more tragedies.

Williams’s death felt personal to many who connected through the actor through his work. The loss of such talent is tragic, but a valuable lesson can be taken from the show of support and appreciation that followed. The expression of love can remind someone that they matter, and it can possibly even save a life.