You are here: Home / Blogs / Kelly Mitchell: To Freeze Time 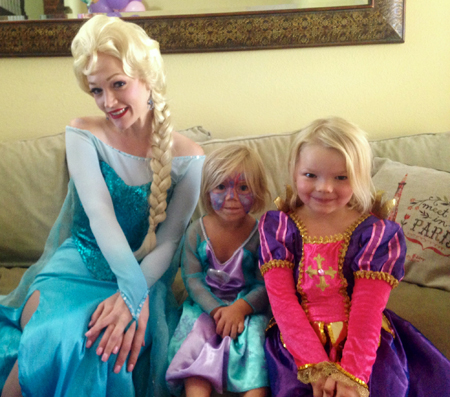 How the Snow Queen melted our hearts.

I remember back in the day (about 10 years ago) my sister was in the phase of hiring “characters” for my nieces’ birthday parties. I always looked forward to these because I just never knew what to expect. My oldest niece had Cinderella at her third birthday party, whom we nicknamed “Ghetto Cinderella.” She was all right, but definitely a little rough around the edges. She had a prominent smokers cough and I think she lit up a cigarette while she was still in the front yard, on the way to her car. Then there was the year they had the pink Powerpuff Girl, who was actually a man. A very large man. With big hairy arms. And he/she didn’t speak. At all. Ever. My nieces still talk about being confused and a bit scarred from that experience. Another year they hired Barney, who seemed OK, but for whatever reason freaked out most of the kids to the point of full-blown tears.

So when my daughter turned 3 recently, she expressed an enormous interest in having a princess at her party, so I began my research. I wondered if Ghetto Cinderella was still in business. Then a friend of ours had a birthday party for her son and she hired “Peter Pan” and “Tinker Bell” type characters from Wishing Well Entertainment. My 4-year-old son and 2-year-old daughter were hooked (pun totally intended). They were the real deal! I mean, I was convinced that these people actually came from Never Neverland to visit the party. They did their shtick, they told stories, painted faces and posed for photos. But best of all, they circulated the party and just hung out with the kids, helping them with crafts, making them laugh, and all the while they never broke character. They got down on their level, looked into their eyes and made them feel special by giving each child their attention. It was fantastic. My daughter talked for months about how she was going to have a Tinker Bell party. I was sold. I could not wait to get “Tink” and her pixie dust to our house. 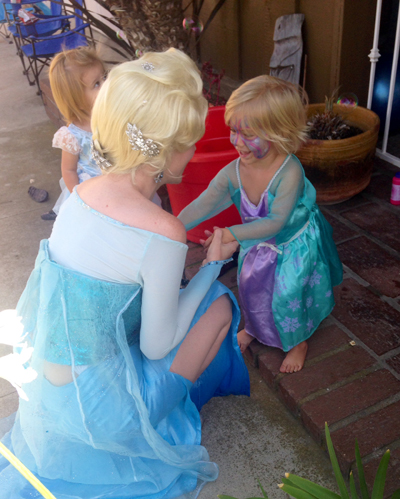 And then ”Frozen” happened. Need I say more? Is there a parent out there who does not have the soundtrack eternally etched in their brain? If they live under a rock with Kristoff and his family of trolls, maybe. But the rest of us parents have surrendered to the folks of Arendelle. I am not bummed at all about this trend, because I think it’s the best thing—quite possibly ever. For the first time in forever, I am not sick of hearing and singing a Disney soundtrack over and over and over again. It’s just that good!

So, not to dis Tink, but when I went on the website for Wishing Well Entertainment and Parties, I saw “Snow Queen” on the list of characters for hire. Oh SNAP! For copyright infringement purposes, I knew they could only refer to her as “Snow Queen” but who are we kidding? We all know who it is. I’ll just refer to her as (M)elsa. I called and booked her faster than you can say Adele Dazeem.

Finally, the day for the birthday party came. I knew from our experience at the Tinker Bell party that the Snow Queen would know what to do, but I still wondered how she was going to keep 16 little kids entertained. Then I started to worry that there were too many kids. How were they all going to get attention from her? Oh well, I had to “let it go” (sorry, I had to) and let her do her thing.

And then right on time, she appeared, gracefully making her way up the pink carpet into our transformed castle-for-the-day. When Cassidy saw her beloved Melsa walking right toward her, her expression was priceless. Melsa leaned down to her level and gave her a big genuine princess hug. Cassidy took her by the hand and led her inside, staring up at her all the while, totally transfixed. 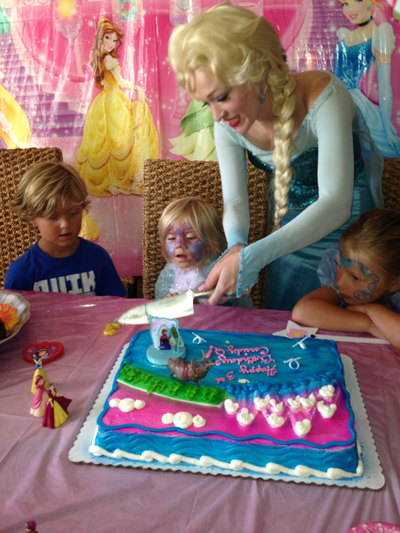 For one solid hour, pure magic happened in our home. The Snow Queen sat down and started telling the story of “Frozen”—with the children’s help of course. Then…THEN…She started to SING! Her voice was so beautiful and powerful and I started to cry. I mean, total waterworks. It was one of those heart-swelling-beyond-happy cries. I looked over at my mom and she was crying too. My friend Jill was also in tears. She had us all mesmerized. I really could not believe what I was witnessing. This was not some random person working kids’ parties for extra cash on the weekends. This was a true professional actor/singer. What, with all this “Frozen” craze and not being able to even find so much as an Elsa doll on a store shelf anymore—here she was! In our home! And she was ALL OURS! She knew how to handle the kids, how to tell a story, how to keep them all engaged with props, puppets, magic tricks, you name it. She even sang while she face painted. I could have taken a break and left that hour for Melsa to entertain the kids, but I didn’t want to miss one single moment. She even led the birthday cake singing and cutting, and took it to a whole new level.

There is nothing more a mother can wish for than to help provide truly magical moments in their children’s lives. This was one of them. The pure joy and wonder exuding from my little girl made my heart soar for weeks afterward. I still smile every time I think about it. Wishing Well’s “Snow Queen” was solely responsible for the best day of my daughter’s life, to-date. Possibly mine, too. I wish I could have frozen time.

Then again, I should have asked Melsa to take care of that while she was here.