You are here: Home / Blogs / Kelly Mitchell: Baby Got Bling 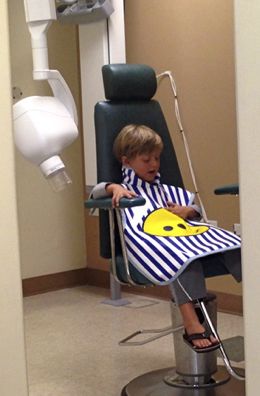 I don’t think you’ve really experienced the worry of motherhood until you’ve taken your child to the dentist. Well, to clarify — to take your child to the dentist to get fillings for FOUR CAVITIES! Yes, FOUR! That would be one cavity for each of my son’s four years of life. All I can say is that I would have given anything to have been given a shot of the laughing gas during that harrowing experience.

I was blessed with good, strong teeth. I did not have cavities in my childhood. Adulthood, yes, but childhood-none. I figured my kids would also have strong teeth. They eat pretty well. But then again-I am totally guilty of bribing and rewarding anything and everything with fruit snacks, and sometimes candy and ice cream-of course. And Capri Suns. Ok wow, now that I am typing this, I am realizing that they eat way too much sugar. Deep down I probably knew this, but I figured-BABY TEETH=WILL FALL OUT. So REALLY does it matter in toddlerhood?

I am here to tell you mommies — YES. It matters. A lot.

I was also pretty lax on brushing. Sure, they have the routine of brushing their teeth, but it’s more akin to sucking on the toothbrush for the fruity flavored toothpaste which probably tastes like guess what-fruit snacks! Again, in the back of my mind, I’m thinking “The important thing here is the routine, because after all, their baby teeth WILL FALL OUT!”

This is true, by the way. Their baby teeth will fall out…in about 5-7 years. At least the ones in the back, which is where the cavities are. So when I took Curran for his first check up, I was beaming with pride at how well he behaved. After dozens of praises about how great he was during the cleaning, the dentist finished up the report by saying, “So the bad news is he has four cavities and we will need to get those filled ASAP so that he can avoid tooth decay and a root canal.” Oh. My. 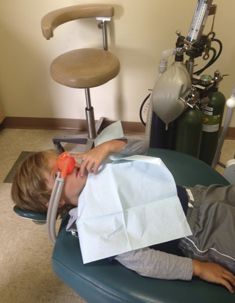 A few weeks later, there I sat waiting for Curran to get his cavities filled. I was a wreck. We sat in the hall waiting for the boy ahead of us to have his fillings done, who was screaming bloody murder. I wanted to peek my head in to see if it was a torture chamber because all I could hear was drilling and screaming. My heart was in my stomach, my stomach was in my throat. It was simply horrifying.

Curran’s turn. He went in and they quickly gave him laughing gas. You know what he did? He laughed. He said it tickled. It was over in ten minutes. Albeit the longest ten minutes of my life, but still-he made it through. The hardest part (aside from my nail biting worry, and total guilt knowing that I allowed this to happen) was the numbness afterward. He bit his lip and cheeks and got blisters. But he did it!

Now he has a mouth full of silver bling. He looks like a rapper when he opens wide. Out of habit, I almost rewarded him with fruit snacks, but I wised up. The look on his face when I offered him a carrot was priceless. “What the?” He will get used to it. He may have been fairly unscathed, but I will never EVER go through that again, bling or not.