You are here: Home / Family Wellness / Acupuncture for All Ages 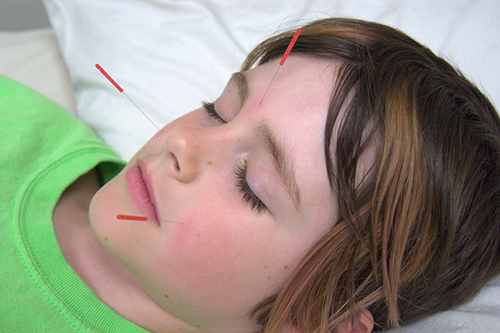 An ancient Eastern treatment originating in China thousands of years ago, acupuncture is making a comeback in both adults and children. It’s a treatment that is believed to open channels where a person’s Qi (pronounced, “chee”), or energy, is blocked and by inserting very thin needles, is opened again. For many, this abstract belief is hard to understand, though those who have tried the treatment, fully believe in the benefits — so much so that the Eastern medicine is becoming increasingly popular amongst children and adults alike.

The holistic remedy is, in fact, so popular that many hospitals and pain centers around the nation are now offering it. According to Dr. Sepideh Said, the only acupuncturist who practices for Miller’s Childrens Hospital in Long Beach, acupuncture has come a long way and is an acceptable medicine for treating children. “We see little kids with allergies, migranes, bedwetting, colic and even hyperactive kids,” said Dr. Said.

Because of the insertion of needles, acupuncture has been long considered an adult-only treatment to main stream Western medicine. However, recent studies are changing that assumption and asserting its safety for children. Most notably was the 2011 review from the journal Pediatrics. In an analysis of 37 case studies, researchers from the University of Alberta in Canada found that in 1,400 children treated, just 168 experienced a mild adverse reaction, such as crying or pain and 25 reported serious adverse events — likely due to unskilled practioners — prompting the study’s senior author, Dr. Sunita Vohra, to say, “In trained hands, acupuncture seems safe in children.”

Although, just because it’s ruled safe, doesn’t mean children will take easy to needle-probing treatment. “With children, I like to explain the process thoroughly by using demonstration or allowing the child to touch and feel the needle (beforehand),” explained Angela Sinnett, a licensed acupuncturist and herbalist and owner of Magnolia Acupuncture in Costa Mesa. “Often times, as with adults, the fear of the unknown is worse than the reality. Therefore, we start with a press needle … It’s a great way to get kids involved in the process, helps empower them and create a sense of control over their own health.”

While some children will take to acupuncture, not all will brave needle therapy. For those that refuse, it’s sister treatment, acupressure, is a great alternative. As its name indicates, instead of needle insertion, finger or hand pressure — or massage — is applied to the body in an effort to restore proper energy, or Qi, to the body. Because it’s less invasive, most children take well to this remedy.

Sinnet explained, “The human body is a complex and highly-efficient machine with an innate ability to heal itself. There is no better medicine than what you already have within you. Acupuncture, when properly administered, harnesses and releases those inherent medicinal benefits.”

A visit with your child’s primary care provider can help you determine if pediatric acupuncture is right for your child. They can also direct you to licensed acupuncturists who specialize in pediatric care.